The Fluffy Stuff: A Closer Look at Cotton

Synthetic fabrics are in the spotlight. News of the damaging effects of microfibres - the tiny particles of plastic our synthetic garments shed in the wash - has been swirling. With each wash, hundreds of thousands of microfibres enter our rivers, our lakes and our oceans, where they contaminate the environment and pose a threat to aquatic life.

In order to combat the damaging spill of microfibres, we're being encouraged to invest in natural materials instead. As the king of natural fibres, cotton tops almost every list of recommended alternatives. Any step away from oil-reliant, environment-polluting synthetic fabrics is positive but cotton isn't as clean as we're led to believe.

Behind those fluffy cotton bolls and pure white lengths of fabric lie tales of slavery, corporate manipulation, desertification and poverty. Let's look a little closer at the world's favourite fabric. 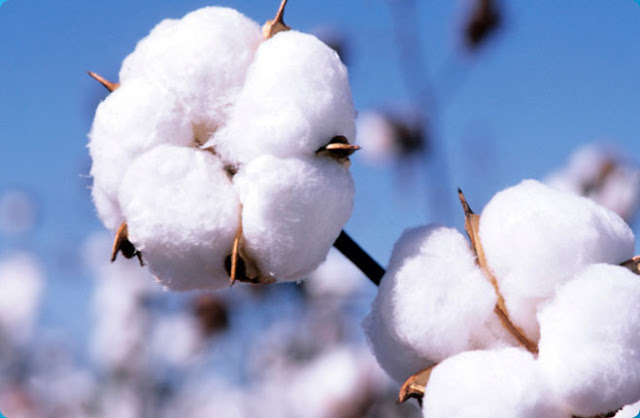 There is a lot to say about cotton and it would be impossible to cover it all in one post, so consider this an introduction to the many faces of the cotton industry.

Producing cotton is incredibly water-intensive. It takes 20,000 litres of water to create just one kilogram of cotton. One kilogram of cotton becomes one pair of jeans. To create a humble t-shirt, it takes close to 3,000 litres of water; the amount the average person drinks over a three year period. Add to this the fact that over half of the world's cotton is grown on dry land, and you have an industry that relies heavily upon irrigation, causing the depletion of non-renewable, freshwater resources.

Perhaps the most extreme example of this dangerous depletion of our precious water sources is the Aral Sea. Formerly one one of the four largest lakes in the world, by 1997 it has shrunk to just 10% of its original size and by 2014, NASA released a shocking satellite image of the dry land where the Aral Sea had once been, declaring it had completely dried up. So what caused this? While the lake itself is (or was) salt water, the rivers that fed it were freshwater. In the 1940s the Soviet Union began diverting the freshwater rivers away from the lake for purposes of cotton irrigation in Uzbekistan and Turkmenistan. In doing so, they starved the Aral of its water sources.

Before the onset of the devastating desertification, the Aral Sea was abundant with fish; a source of income and food for those who lived on its banks. The thriving industry shrank with the water levels and where water once was, now lies the exposed lake bed which contains a dangerously high concentration of salt, pesticides and chemicals. Dust storms blow this poisonous cocktail into nearby villages where, as a result, the locals suffer from tuberculosis, cancer and lung disease.

Such devastation, simply to sate our desire for a single crop. 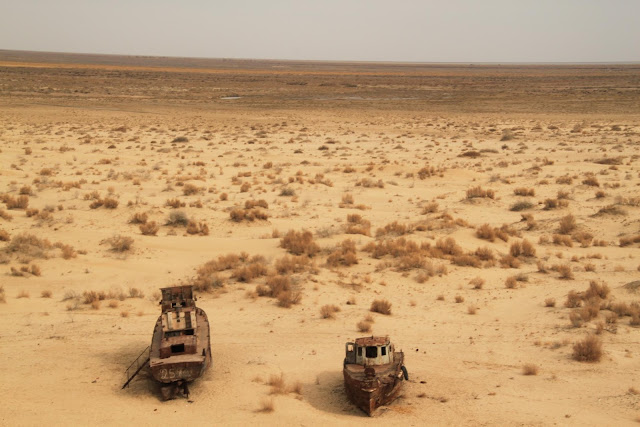 Slavery in the Supply Chain

Moving from a lifeblood of the people to the people themselves, let's go behind the scenes of Uzbekistan's cotton harvest. As one of the world's biggest producers and exporters of cotton, the government-controlled operation is huge and, as almost all of it is picked by hand, they require a lot of people power to get the job done.

The answer? Forced labour. Unable to find enough seasonal workers, the Uzbek goverment simply forces citizens out of their jobs to spend weeks in the fields picking cotton. There is no refusing: hospitals lose their doctors and nurses, schools loose their teachers. But the process isn't limited to adults and teachers may well find themselves joined by their students in the field, working under punishing conditions towards impossibly high quotas.

There has been some progress. Since 2012, forced child labour has been reduced thanks to global pressure. Reduced, yes, but not abolished and more adults are simply drafted in to fill their place.

This is only one part of the story; slave labour runs right through cotton production, from picking to spinning to sewing. And I can't possibly fail to mention the dark and shameful history of American cotton slavery, although I feel that it deserves a platform of its own from which people far more knowledgeable than I can speak.

As it's such a booming industry, you'd be forgiven for thinking cotton farmers are raking in the cash. And some are. The Doha Development Round was a strategy developed in 2001 by the World Trade Organisation to bolster growth and create wealth in developing countries. However, during negotiations, those very developing nations were sidelined in favour of the US and the EU.

In the US, for example, billions of dollars have been doled out to cotton farmers in subsidies in order to sustain the industry. Such huge subsidies protect US cotton farmers from market fluctuations, allowing them to maintain consistently low prices. The European Union also hands out large cotton subsidies as does China and, to a lesser extent, India. This all sounds incredibly positive but it has a direct, negative impact on Africa's cotton industry.

Benin, Burkina Faso, Chad and Mali are known collectively as the C-4. They produce cotton more cheaply than anywhere else in the world and rely on it for almost all of their respective export revenues. But, because they receive no subsidies at all, and with the price of cotton falling in real terms over the last 60 years, farmers and producers in the C-4 are left poverty-stricken. Simply by putting an end to US subsidies, the average household income in West Africa could rise by up to 9%. The C-4 have formally requested a reduction, and subsequently elimination, of subsidies by the WTO but a resolution has not been forthcoming. 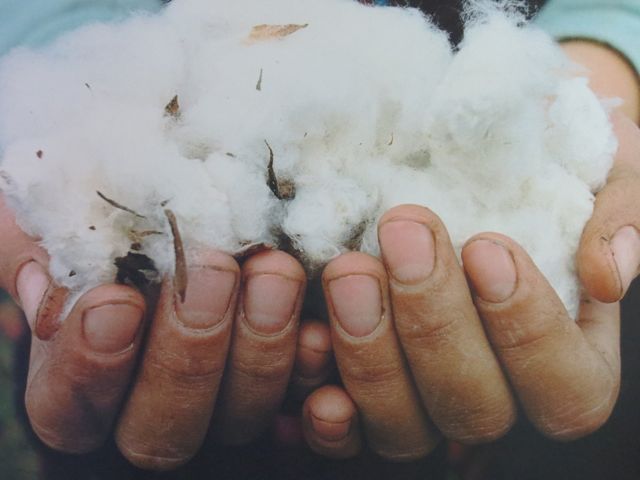 I mentioned in the previous section that India receives subsidies and it would be reasonable to think that their farmers are more on a level with the US than the C-4. Not so. They might have a head start on the C-4 but India's cotton farmers are deeply in debt and committing suicide at an alarming rate.

Monsanto is an agriculture company. A giant, highly profitable corporation, it has a monopoly over the Indian cotton industry; until recently their genetically modified 'Bt' cotton accounted for around 95% of the country's cotton farming.

Bt cotton is (or rather, was) resistant to Bollworm, the biggest threat farmers face in terms of pests. Unfortunately, Bt cotton seeds cost three to five times as much as ordinary seeds and, despite no longer being plagued by the Bollworm, yields were much lower than promised and farmers sunk into debt as disappointing yields meant they couldn't pay back the money they had loaned in order to buy the seeds in the first place. These GM seeds also require more pesticides and fertiliser, adding more to the cost of production.

In a cruel twist, Bollworm has now developed a resistance to Bt cotton so yet more toxic pesticides need to be bought and sprayed onto the crops.

Entrenched in debt and with no way out, Indian cotton farmers are killing themselves at a terrifying rate; there have been close to 300,000 suicides since 1995.


The Peril of Pesticides

Staying with India for the moment, as mentioned above, the use of pesticides is rife as farmers struggle to maintain their GM crops. However these pesticides aren't just deadly to the pests. One pesticide in particular, Aldicarb, is so potent that just one drop absorbed through the skin can kill an adult. Often applied without masks, gloves or any protective equipment, farmers are regularly exposed to dangerous amounts of these toxic chemicals.

Across the globe, even in the US where health and safety is enshrined in law, farmers experience a plethora of health problems from exposure to pesticides, from abdominal pain and convulsions to pulmonary oedema and kidney dysfunction.


Something in the Water

Circling back to water, depletion of freshwater isn't the only threat cotton poses. The raw fabric is often dyed with shocking disregard for the local environment. Located on riverbanks, factories spew thousands upon thousands of litres of dye-contaminated waste water directly into the river, staining the water, damaging the ecosystem and rendering the drinking water unsafe.

While governments rely upon cheap fashion exports to prop up their economies, they will only continue to turn a blind eye to these illegal and harmful practices.

Luckily there are some alternatives to 'standard' cotton than can help combat the environmental impact and human cost:

Organic Cotton
Certified organic cotton must be free from toxic pesticides, GMOs, chlorine bleach and other hazardous chemicals. It must be produced adhering to strict labour laws.


Fairtrade Cotton
The Fairtrade Foundation encourages sustainable production and guarantees a fair price for farmers. They work with some of the poorest farmers in the world to unlock new opportunities and ensure they get a fair deal. Organic, Fairtrade cotton is the golden duo.


Hemp
Hemp requires between a quarter and a third of the amount of water cotton uses and farmers can produce three times the amount of hemp fibre as cotton fibre on the same amount of land. It's worth noting though, that hemp does take slightly more energy to produce in some cases and also produces slightly higher emissions in some cases.


Tencel
Lycocell (more commonly known by its brand name Tencel) is produced from wood fibre. It's certified as containing no harming substances, it's manufactured using a closed loop process and it uses less water and land than cotton.